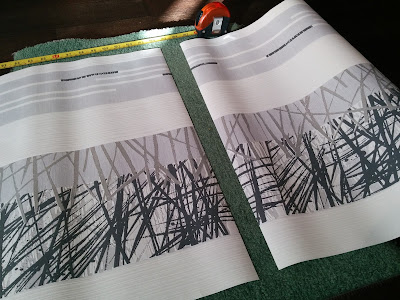 Like paint colours, there are trends, and most people gravitate toward certain colours and patterns because they saw them in a decorating book or on a TV home renovation show. What I enjoy most, is hanging something that is unusual. This pattern qualified. 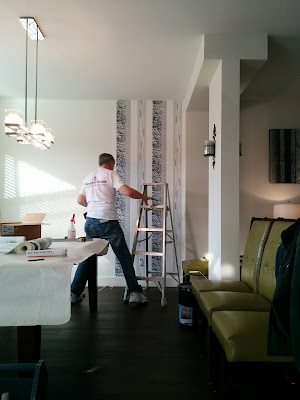 There was no pattern match on the seam so hanging it randomly made for quickness, ease, and efficiency. 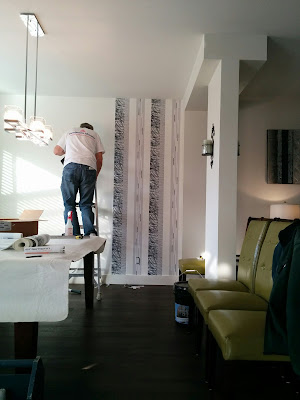 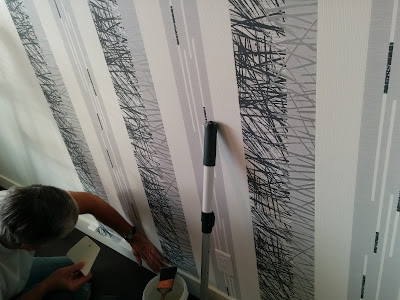 A job like this completed in under 2 hours and is a lot of fun. 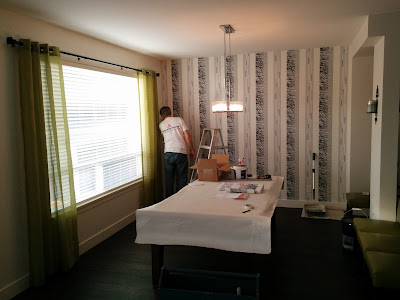 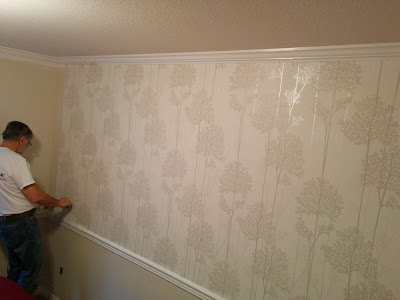 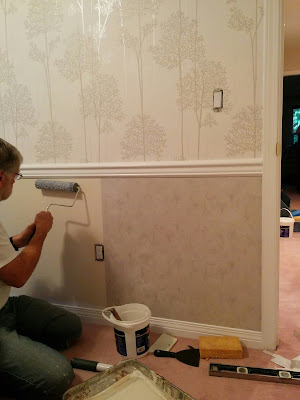 With the growing trend toward more wallpaper being used in homes today, one thing has become apparent. The old days of papering the whole house or a whole room are gone. Blocking, using paper on one wall as a feature, is the norm, or, if a whole room is done, it is usually the powder room. So I was surprised when this customer wanted her whole bedroom done. But not only was the whole room done, but the old fashioned 5/3 split and a retro paper was also requested. I felt like I was back in the 80's. 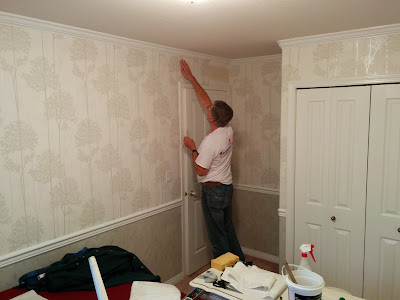 But, she loved it and that is what matters. Decorating should be what you want and what you like. It is a very individual thing, unless you are doing it for re-sale, in which case, the latest trend would be in your favour. 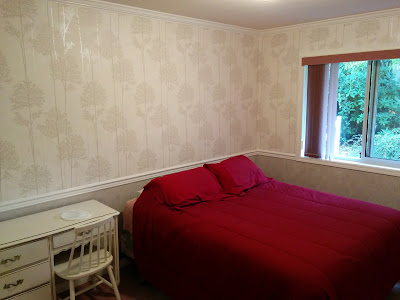 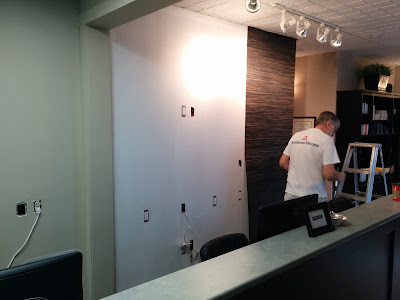 Grass cloth is a very specialised and expensive wallcovering and I learned to hang it in the 80's when the west coast designed homes were popular, the ones with vaulted ceilings, natural cedar walls and lots of grass cloth. There was a learning curve and it took me many tries and mistakes to eventually develop my own technique and today I do not feel intimidated by it. It is a rough and tough product, hard on the tools and very difficult to trim and cut, particularly around electrical outlets. The small feature wall in this cosmetology clinic had around 20 such outlets. Besides that challenge, the Dr. wanted us to cover the post in the middle of the wall, and grass cloth does not 'go around the corners' due to its horizontal natural fibers and its great stiffness. 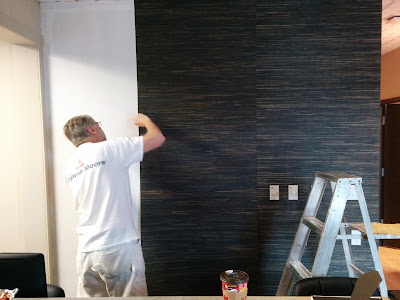 But, with a great amount of patience and perseverance, we were able to complete the job on budget. I must say that it is quite striking as you walk in the front door. Considering we hung the grass cloth over existing vinyl wallpaper, which we had to prime first, it turned out quite well. In retrospect, I should have bartered for some plastic surgery. 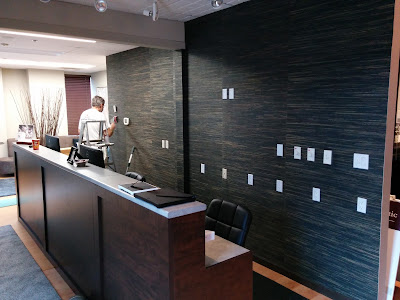 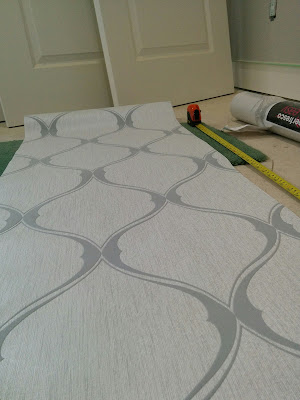 This particular pattern has been very popular, and here we are doing a wall in a custom built home in Mission. This is a beautiful product to work with and a job like this takes less than two hours from set up to clean up. 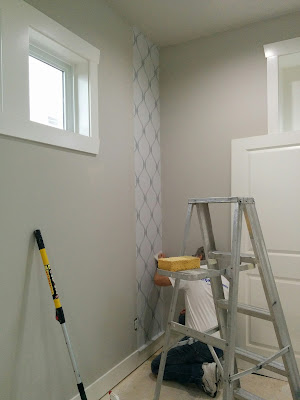 The one challenge here is that there is a window to go around, which in itself is not at all difficult, but to get the pattern to match at the other end of the window is always a hit and miss situation. The slightest variance will result in an open or overlapped seam and or a mismatched pattern. 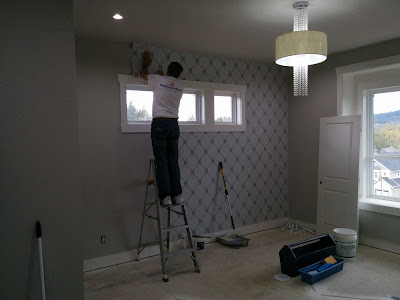 We did good on this one. I have done at least 5 of these feature walls for this builder. The downside is that he takes forever to pay. 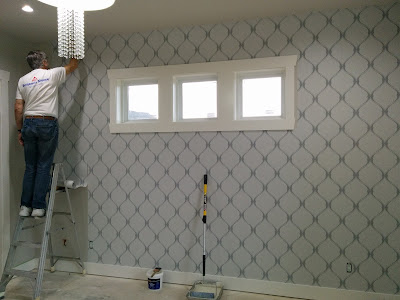 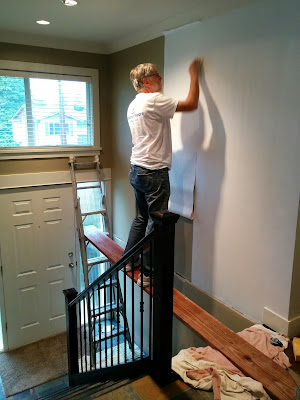 It is always a solid vote of confidence when a reputable builder hires you for one of the  homes he is constructing, and then later gets you to come and work in his own home. I was not going to do any more stairwells, but this one was not that difficult to access, especially after he dismantled the end rail on the upper landing. 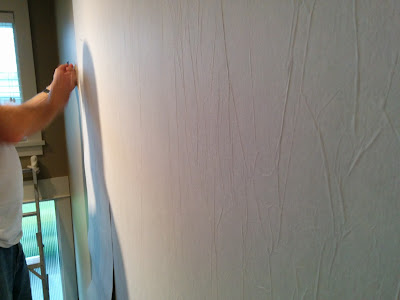 It is a bit tense working on a suspended plank, at my age, but I do not do anything that I do not feel safe doing. This was a nice textured paintable wallpaper, and though I did not see the finished product, it looked good even without the designer colour on it. 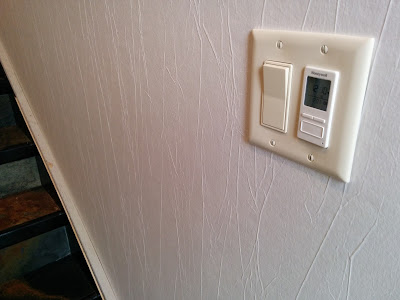 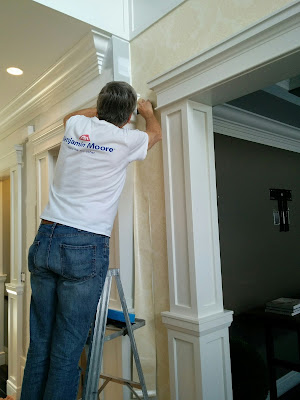 "I fired the last guy who tried to hang my wallpaper. Do you think you can do better?"
With that comment from the caller, I was a bit intimidated but decided to at least take a look at what was "not good enough" and determine if I could do better. He had stripped most of the wallpaper by the time I had driven out to Chilliwack, but left a few areas for me to see, and discover for myself how bad the job was. Besides the evidence on the wall, he had a collection of 20 or more close up photographs of the offending seams and cuts. I walked in the front door and was impressed by the ornateness and  quality of the home, and the youth of the owner. He had developed a very successful IT company and had then sold it for an astronomical amount of money. It showed in the expensive taste of the new home. 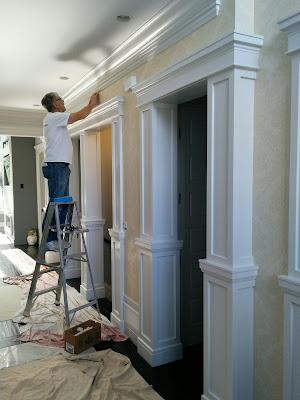 As you can see by the photos, there were many ornate trims and crowns to cut around and this is where the previous paper hanger failed miserably. I knew I could do better, but after accepting the job and starting, I discovered on my very first piece why the previous guy had so much trouble. The paper would not cut but just bunch up under the knife and tear, more than anything. The sharpest blade will not cut the wet pulpy paper with so very little wear layer on the surface. 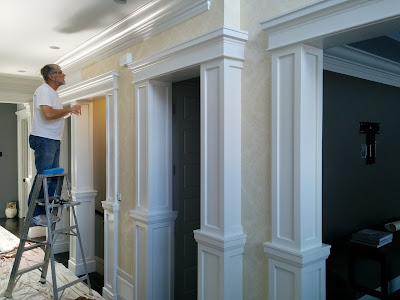 I called him over after the first piece, which involved a cut around one of those doors, and he was so impressed he let me continue. My problem now was the cost to me. I had estimated for a certain amount of time at a certain rate but ended up spending more than twice as much time. It was nerve wracking and tense work, but he reassured me his goal was a good job and not a cheap price. That helped me to relax and the next day we completed the task and were paid well for our efforts. 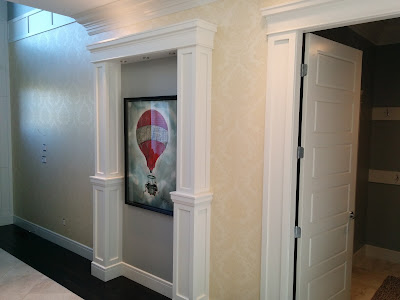 It is not unusual for the more expensive wall coverings to be the poorest in quality. Often, a designer puts his name to a product and the price shoots up, when the consumer assumes the high price will give him some quality. 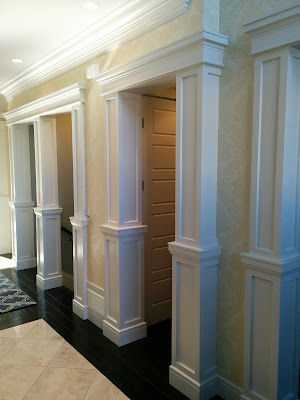 But, if "the look" is achieved and the area does not have high or rough traffic, it works. 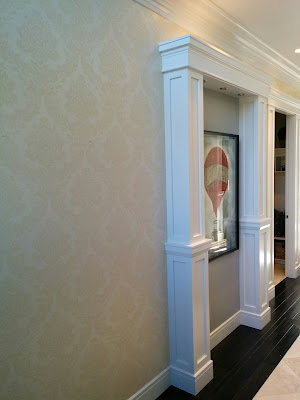