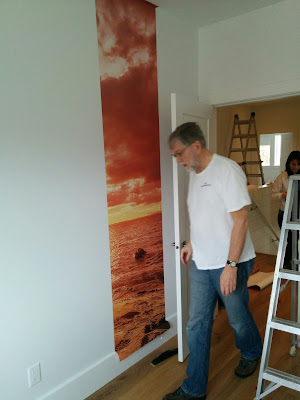 The call came from Crescent Beach in White Rock, asking if I would hang a mural and how much would I charge. I asked a few questions, gave a price, and two weeks later arrived at the newly constructed home two blocks from the beach. What I did not ask, and the client did not tell me, was that this was no conventional mural. It was a 'peel and stick'. Now, I have worked with peel and stick cupboard liners, glass obscuring peel and stick, and peel and stick wallpaper borders. I never liked working with this medium because there is no slip and no second chance, making it almost impossible to line up the edge where you want it to go. I had no idea there was such a thing as a peel and stick wall mural. Did I mention it was 9 1/2 ' tall? Her daughter had chosen the photo from her mom's portfolio and it was actually a sunset from a few blocks away from their home. The manufacturer was from Germany and it was actually a commercial application and very expensive. It was custom made to fit her wall's height and width. 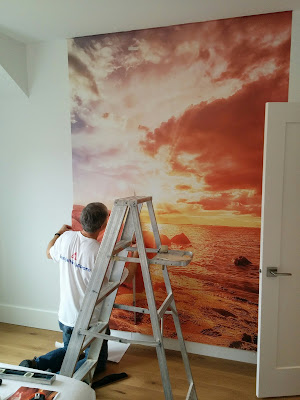 We had to really think this through as once it is started there is no turning back. We did not start in a corner because peeling a bent sheet as goes into the corner only creases it. I wanted to get the hang of it, so to speak, on an easy piece in the middle of the wall. Good thing I did. It was truly horrendously difficult. What made it even worse was that there was no distinct pattern match until the place where the horizon met with the water. Until then, the cloud match was nebulous and an eighth here or there made no difference. We worked out a way to match it, but did not realise that the material stretches slightly as it peels from its backing. By the time we got to the horizon, the match was off. Then we had to try to peel it back and rework it from the horizon up. The stretch and lack of forgiveness of this mural drove me crazy. At one point, the sticky side fell back on itself. We learned later, via Google, that this mural was worth more than $600.00 and I knew if I tore or creased it, I would be buying a new one. That was most tense 20 minutes of the day as we struggled to peel the sticky side from the sticky side without damaging the sheet. 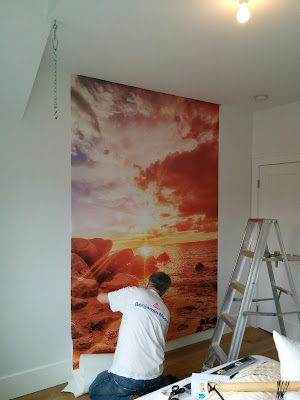 I have never agonised and perspired over a project like this in all my 40 plus years of working. 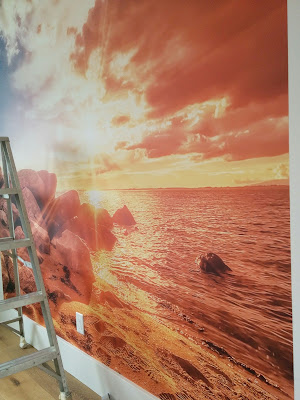 The client came to check a few times and was falling in love with it and saying that she was so glad we were perfectionists. OK. 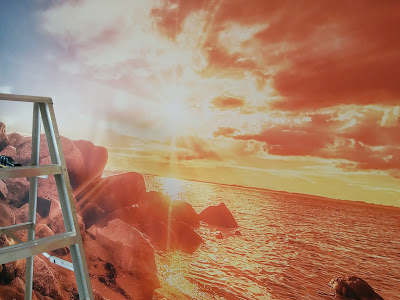 In the end, the last of the 6 panels got away on me and there was a crease, but in the best possible place. 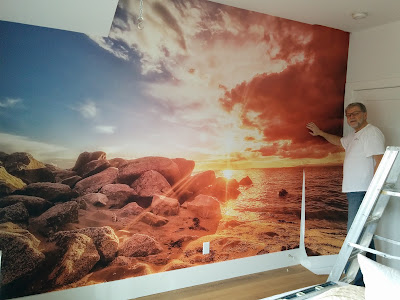 Here, I am placing the bottom of the last panel, greatly relieved but shaking from the stress. 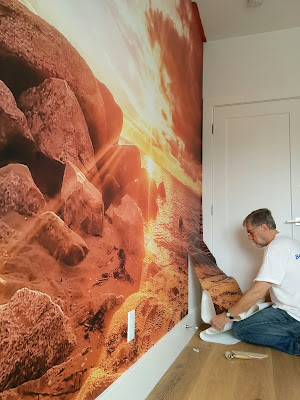 Two feet to go, trim the top and bottom, and it is done. 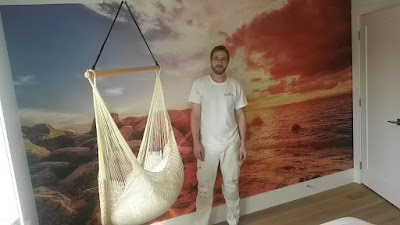 It was spectacular. I told the client that when her friends saw it, and wanted to do one like it, to not call me, unless they had it printed on conventional mural materials, like photographic paper or non-woven material. I will never hang one of these again. Ever! 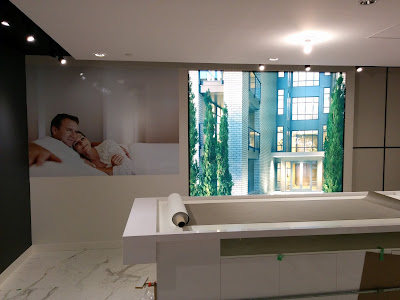 There is a new, rather large, high end condo project in the works and the owners called on us to do some wall coverings in the show suite/sales center which will be opening shortly, if it is not already. There is a washroom mock-up, done in marble, glass, and mirrors that needed a bit of dressing up. The graphics guys were already putting up their art work when we started. Fortunately we had a perfect work table where the architectural model was going to be installed under glass. That is our continuous roll of high end ultra fine string cloth on the table in the top photo. 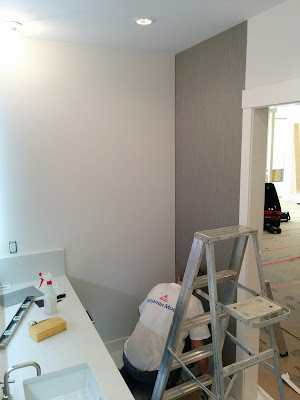 There was some debate as to whether the material should be hung vertically or horizontally. Vertically won out. 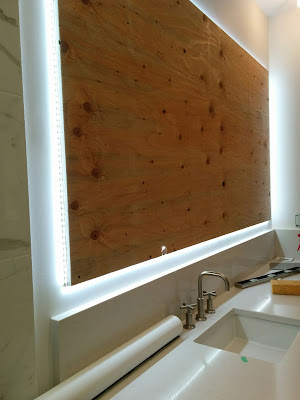 This mirror was protected with a sheet of plywood. There was just enough room to run our material against the LED lights. There was another frame of glass going around the lights and the final effect was supposed to be spectacular. I will be going back when it is open to see what they were talking about, but I could see that it was going to be good. 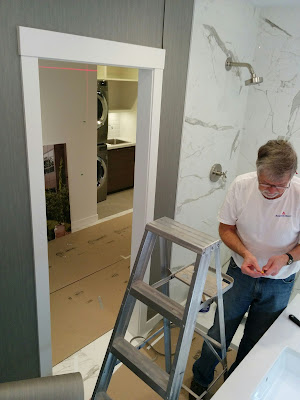 The final piece is going against the marble. I was so glad that they had not caulked or grouted the edge so I could tuck the material just behind the edge, making a perfect finish line. Working with high end is a bit stressful, but when the end of the job comes and it turns out well, there is little that is more satisfying. After all, there will be many eyes on this project. What sells units for the developers? Location, price, layout, materials, and workmanship. 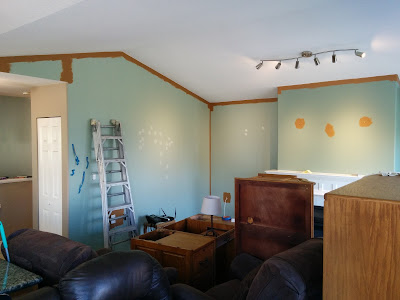 Several years ago we painted the entry/stairwell for this couple on Promontory Heights in Chilliwack. They called us back recently to do the kitchen/family room. It was so packed with furniture, shelving, and knickknacks that I was sure we would have to help them move it all. When we arrived at the prescribed time, the room was cleaned out enough so we could get around the edges to prep and paint the walls. Again, a total transformation with some intense colour. This is going against the trend which is light grey/beiges. I was happy that I did not have to help them put it back together. 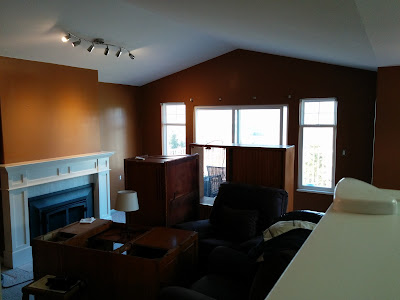 Work With a View 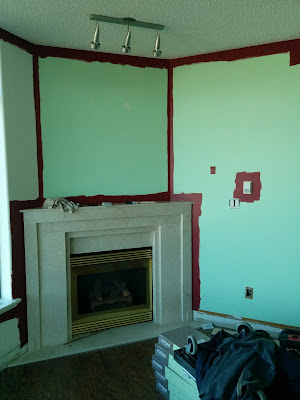 We were given ample lead time for this job, but, the day we started it, we found out there were severe time restraints and deadlines. We had already started on a Saturday morning to get a head start. The floor layers were there and promptly informed us that we could only be one hour as they were 'floating' the wavy floor in preparation for laminate. The smooth set could only be walked on 24 hours later. So we hit it with a vengeance on Monday morning. 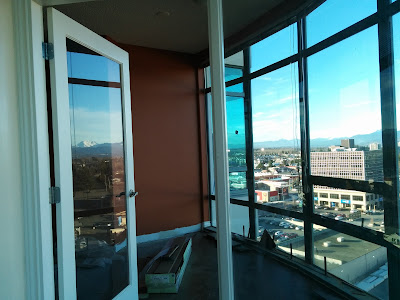 There were some intense colours and the change from lime green was welcome. 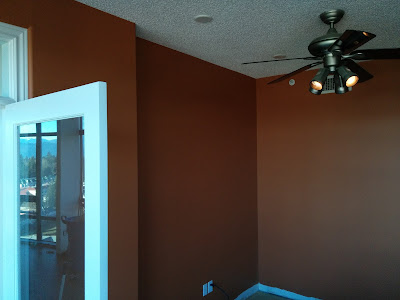 The office was a deep burnt orange. There were six colours altogether. The living/entry was a deep rich red with black trim. 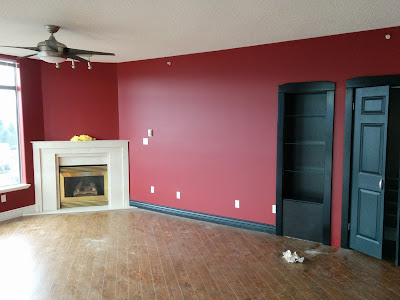 We finished about an hour after the final cleanup crew arrived, and the movers were parking their big rig at the base of the tower. We put up with loud saws, hammering, and very fine sawdust all week and were more than happy to get out of there. This was the third home I have painted or wallpapered for this client. We also hung some commercial vinyl wall covering in his restaurant. Needless to say that we like each other. 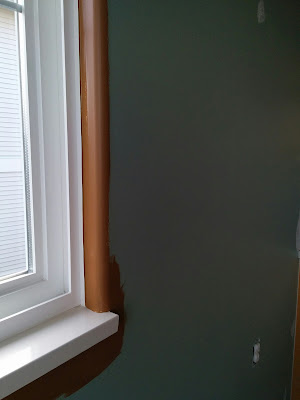 Watching American Politics has never been more fascinating. With every day that passes in the race for the nominations for the presidency, the stakes get higher and the citizens of the USA become more polarized.
It is interesting that Bernie Saunders and Donald Trump, though diametrically opposed on almost all issues, are using the same tactics to gain support. It is the old trick of dividing and conquering with fear, alienation and anger. Donald with his dose of racism and Bernie with his 1% lament and diatribes against the wealthy. Each of them have their own brand of 'scary' if they should be elected. And heaven forbid we get another lying Clinton in the White House.
To put things in a little bit of perspective, let us realise that so much of what we see is showmanship and manipulation of the electorate. Knowing what to say and how to say it is the key to winning over voters, especially those who are ignorant regarding the pressing issues that are often ignored in political campaigns. We saw a classic example of this in our Canadian election just a few months ago.
But we must realise that the POTUS does not really run the country. The bureaucrats, congress, special interest groups, lobbyists, and big business with its deep pockets are who truly pull the strings behind the scenes. I recently heard Obama state that much has been done but there is so much to do. He was referring to his 8 years in office and his accomplishments. He had 8 years and there was still much to do! That says that he did not have the power to do what he really wanted, and it will be that way with the next president.
But for me, the bottom line can be found in Daniel 2:21 where it says that God sets up kings and deposes them. That says that God is in control and if Trump (or Saunders) get in, it is not a surprise to God and he will use that for his purposes.
So I would like to see the American people let democracy run its course. Forget the protests and attacks, and let the people vote for their leader. It is all orchestrated by God and last I heard, He does not make mistakes.
Posted by Terry at 2:24 PM No comments:

Email ThisBlogThis!Share to TwitterShare to FacebookShare to Pinterest
Labels: Politics 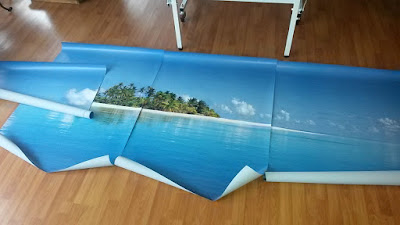 It is always a bit of an adventure going to a new job to actually hang the mural before seeing the mural or the room it is going in.
This was a surprise because of the size. It was 12' wide but only 4' high. It fit quite nicely onto the wall behind the bar in this basement man cave. 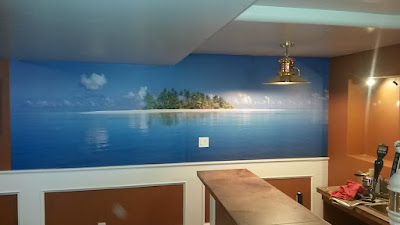 I thought it was quite fortuitous that the light from the lamp hit the photo mural in just that spot, making it look like the sun was breaking out on the beach. It is a photo of one of the Maldives Islands. Being a cold and rainy day, this really made me want to go there. 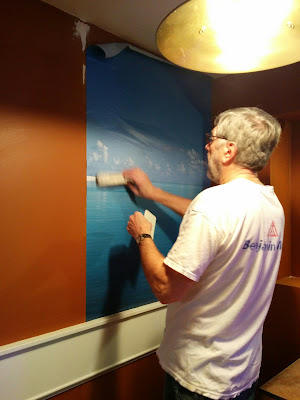 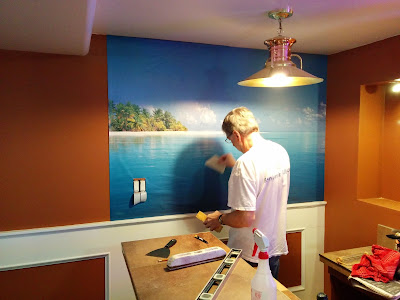