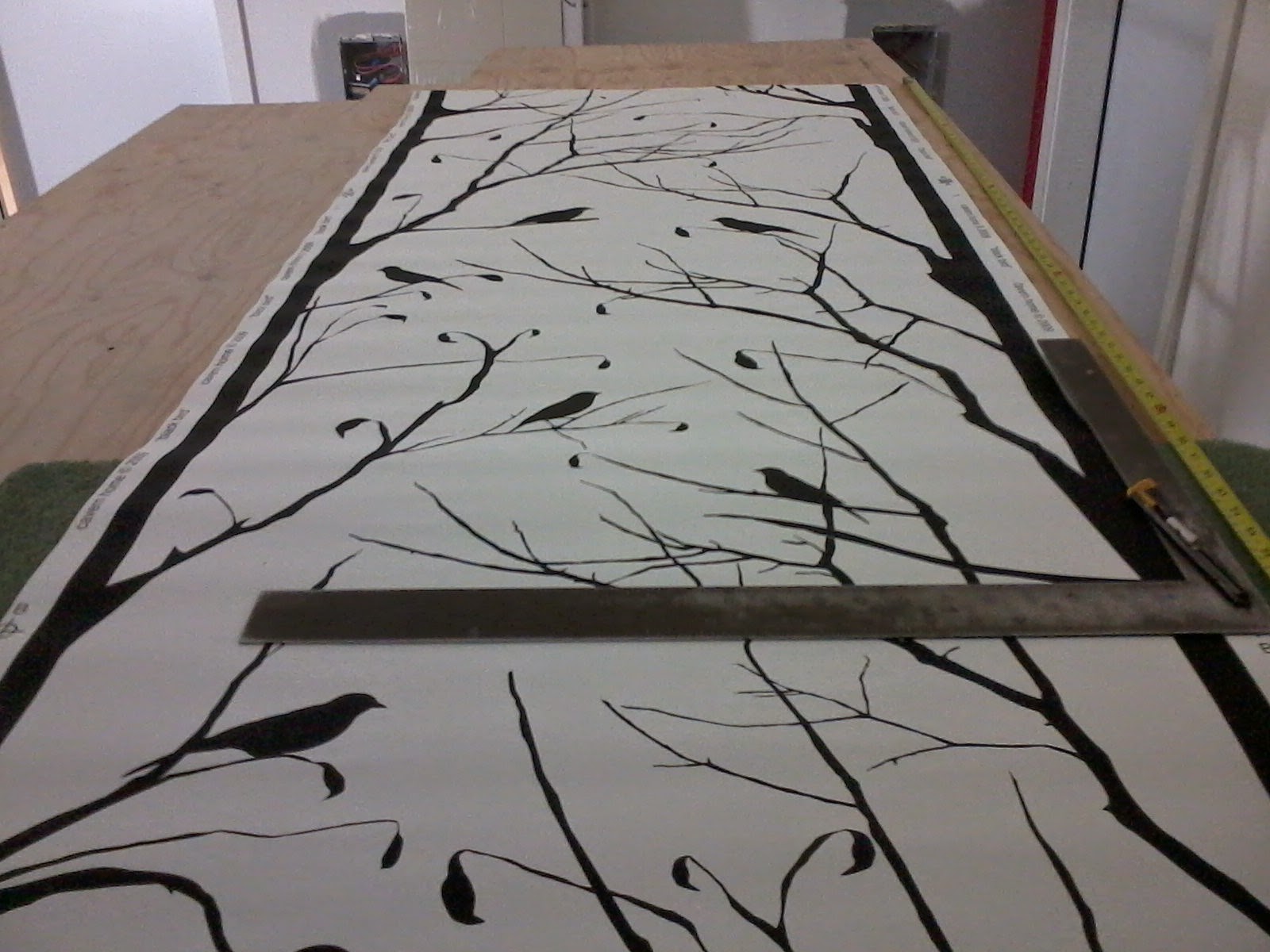 Monday morning found us in Chilliwack working with a specialized wallpaper and then some Grass Cloth. I was only told that the paper was non-pasted so not knowing anything else about it, I quoted an hourly rate instead of guessing at the time involved. Good thing! 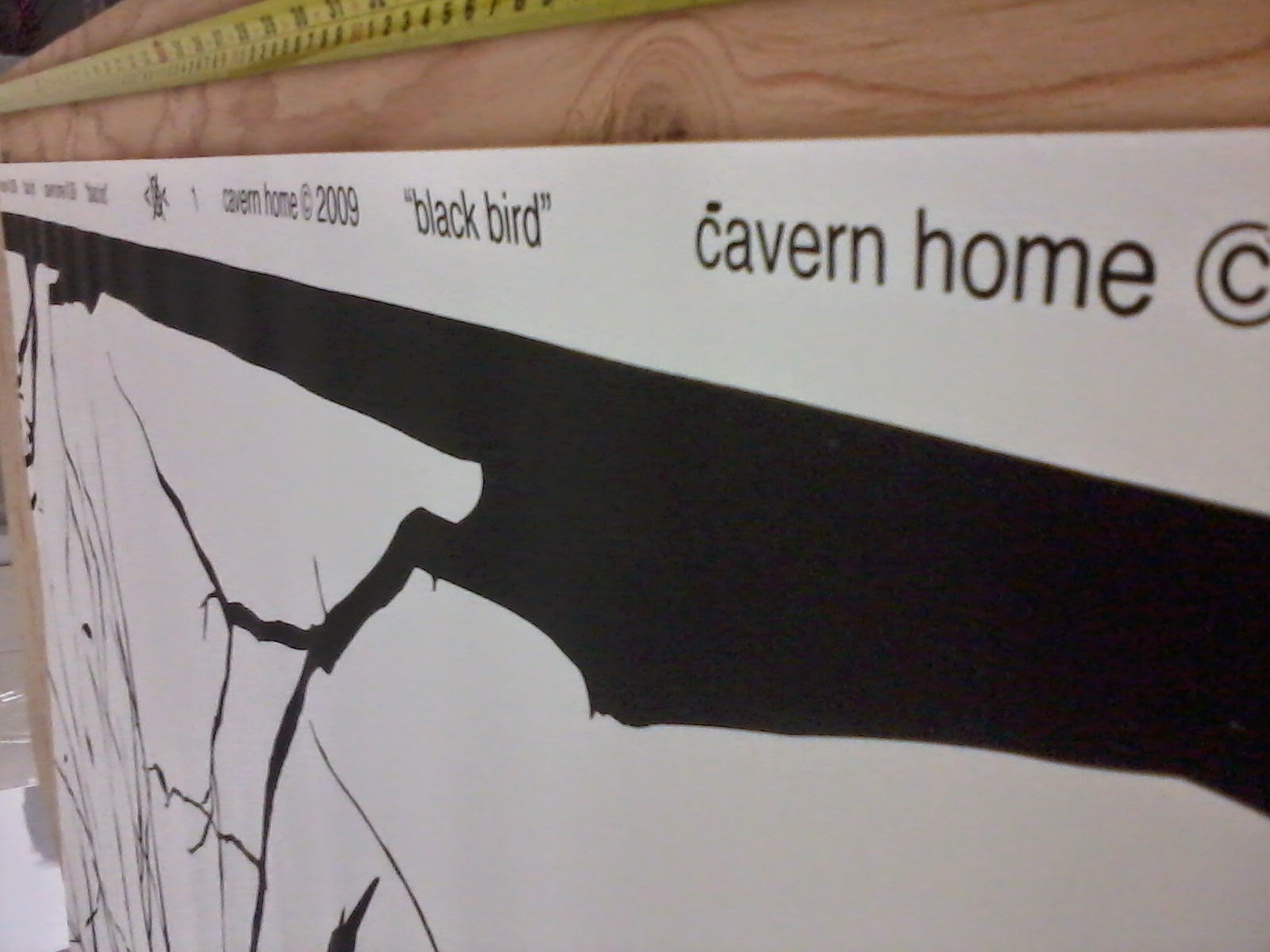 This material came untrimmed and un-pasted. The end result was supposed to look like a mural so pattern match was and was not an issue. The seams all met on the black tree trunk but the birds could not line up in rows. Making our own seams on a black background does not work so each panel had to be overlapped and double cut, care being given to keep the tree trunk as wide as possible and as much like the next one as possible. After a few pieces this paper was stressing me out. 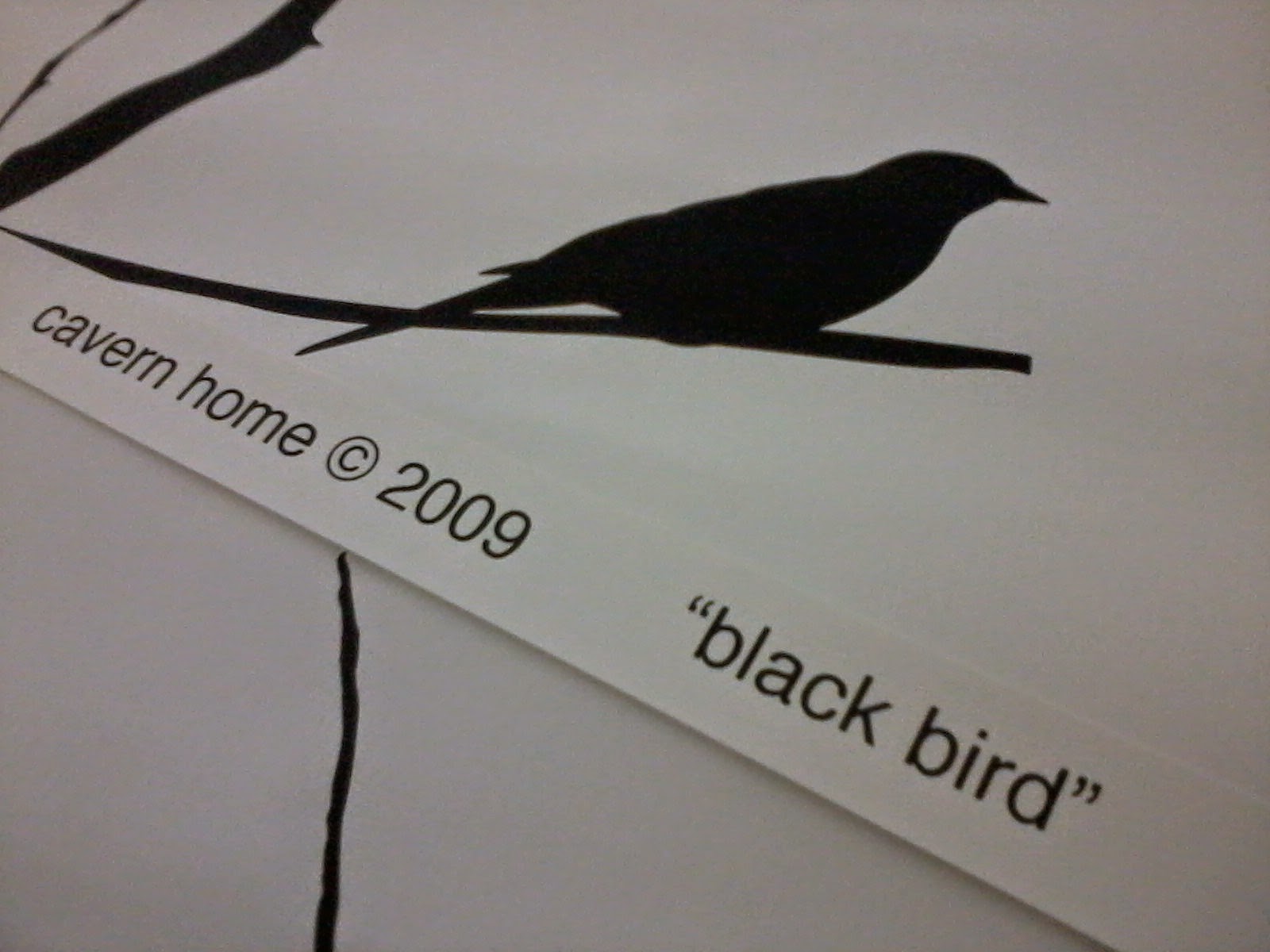 Because the tree trunks were so pronounced, we had to map out the room before we installed the first piece as it was important to know where each and every tree trunk would be in relation to the corners and the window. To make things extra challenging, it was a reno of an older home and the corners were not plumb or square. 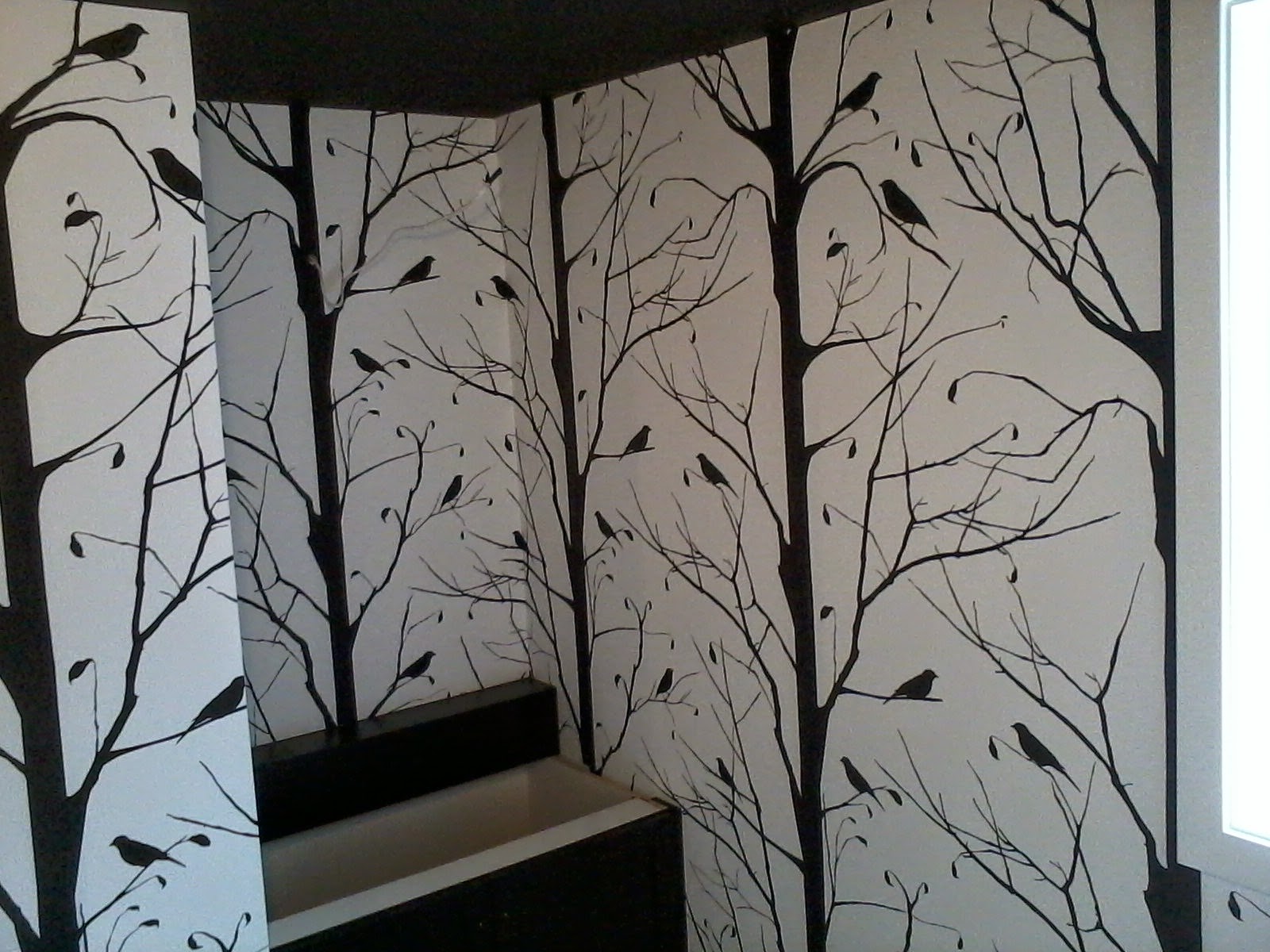 Four hours later, the customer was very pleased with the result and I was pretty proud of most of what we had done. Time will tell if anyone else has a paperhanger's eye and spots the small mistakes I made. 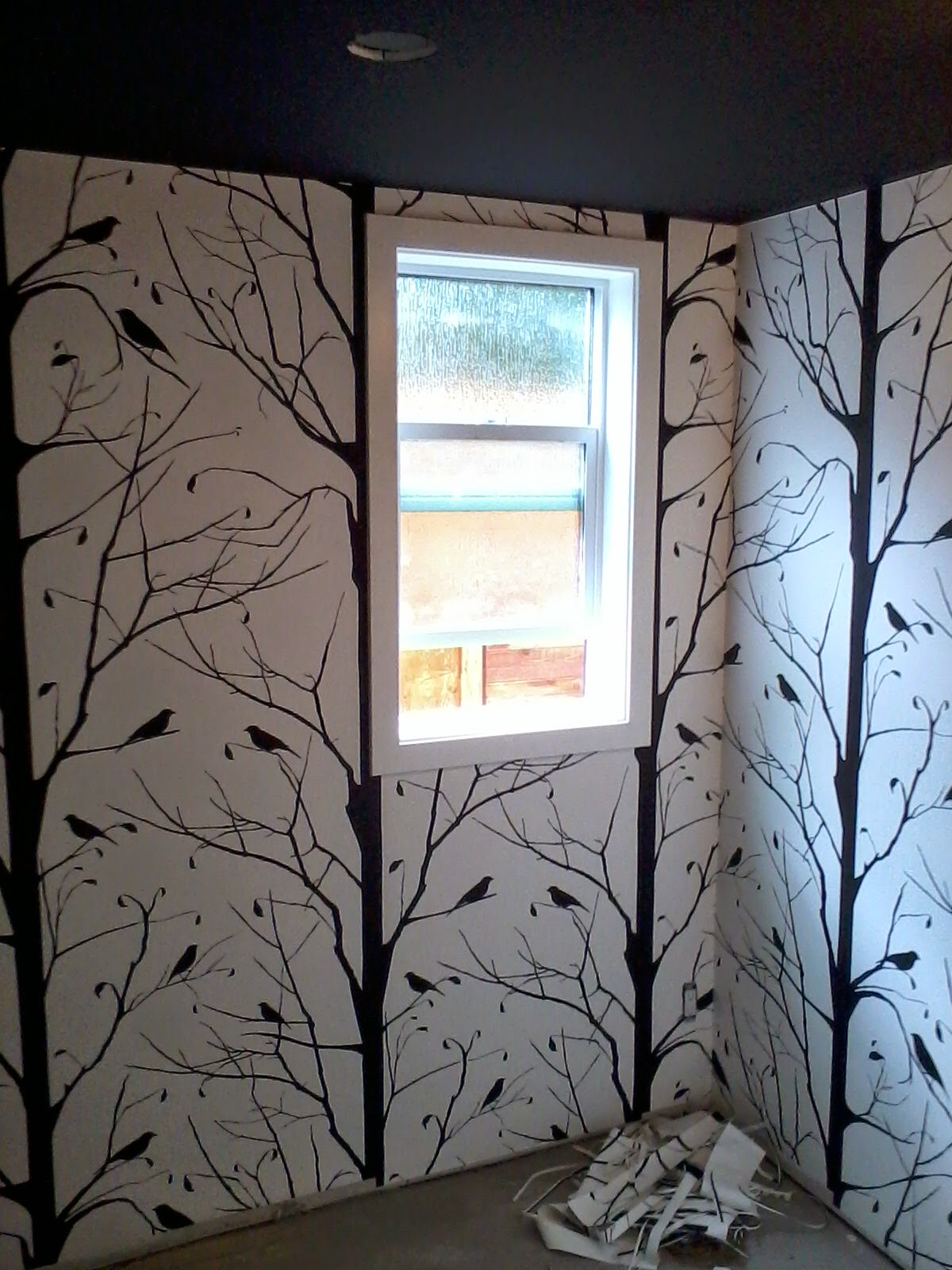 Note the window framed by tree trunks and tree trunks centered on all the walls. This was partly planning and mostly luck. I hung something similar, but with Peacocks, in a psychologist's office and was instructed to be very certain that there was not one single Peacock's head cut off at the neck as it would freak out some of her clients. I got lucky on that one too because once you start, the pattern is set and it will come out how it comes out. 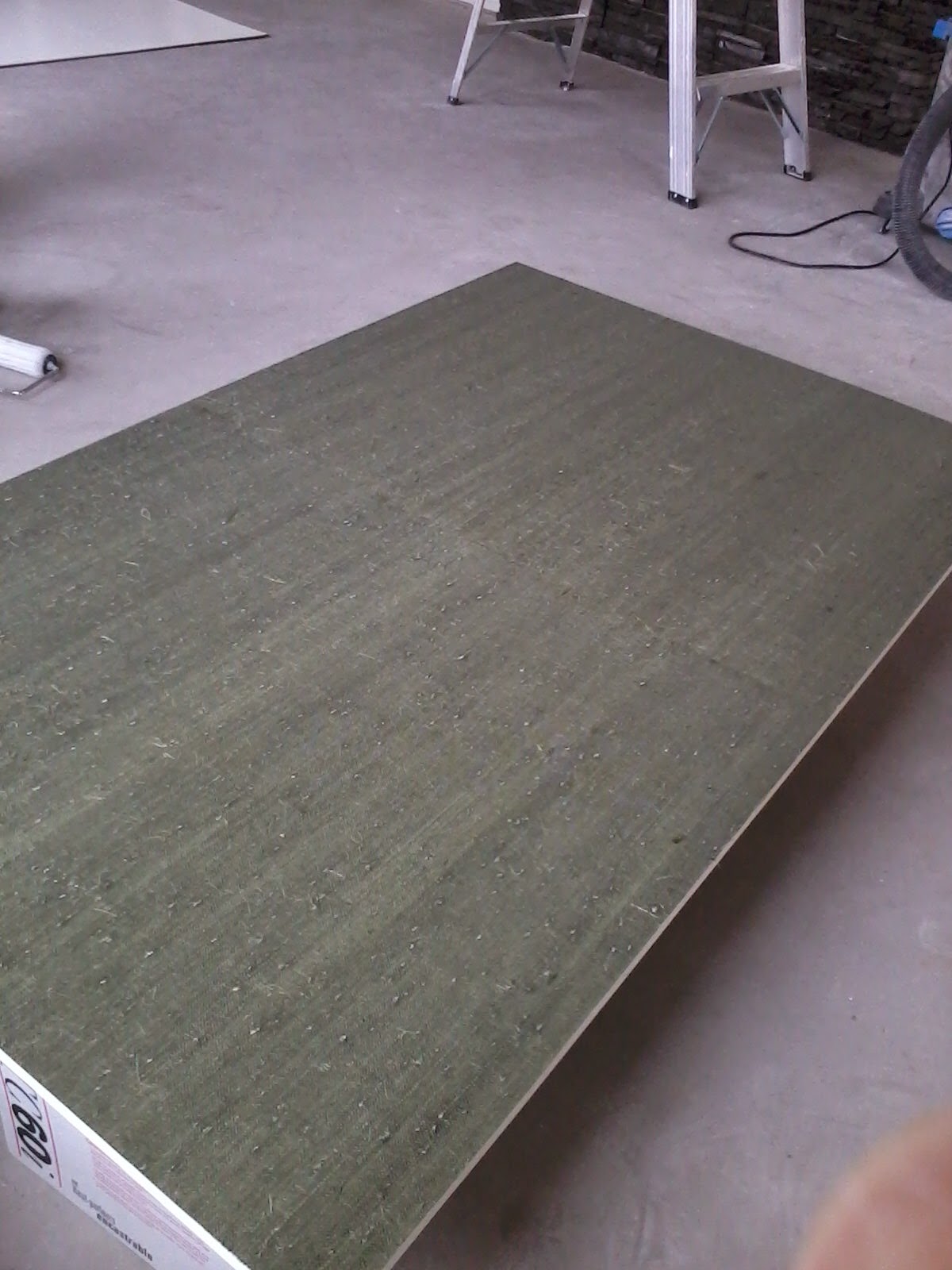 One last thing to do on this job was to hang two panels of Grass Cloth on a sheet of primed MDF, which was to  be mounted on the wall as a backdrop for some kind of Chinese artwork. That took about ten minutes and then we were off to another job off Annis Road in Chilliwack. We will be there for quite some time.

Easy, Not so Easy 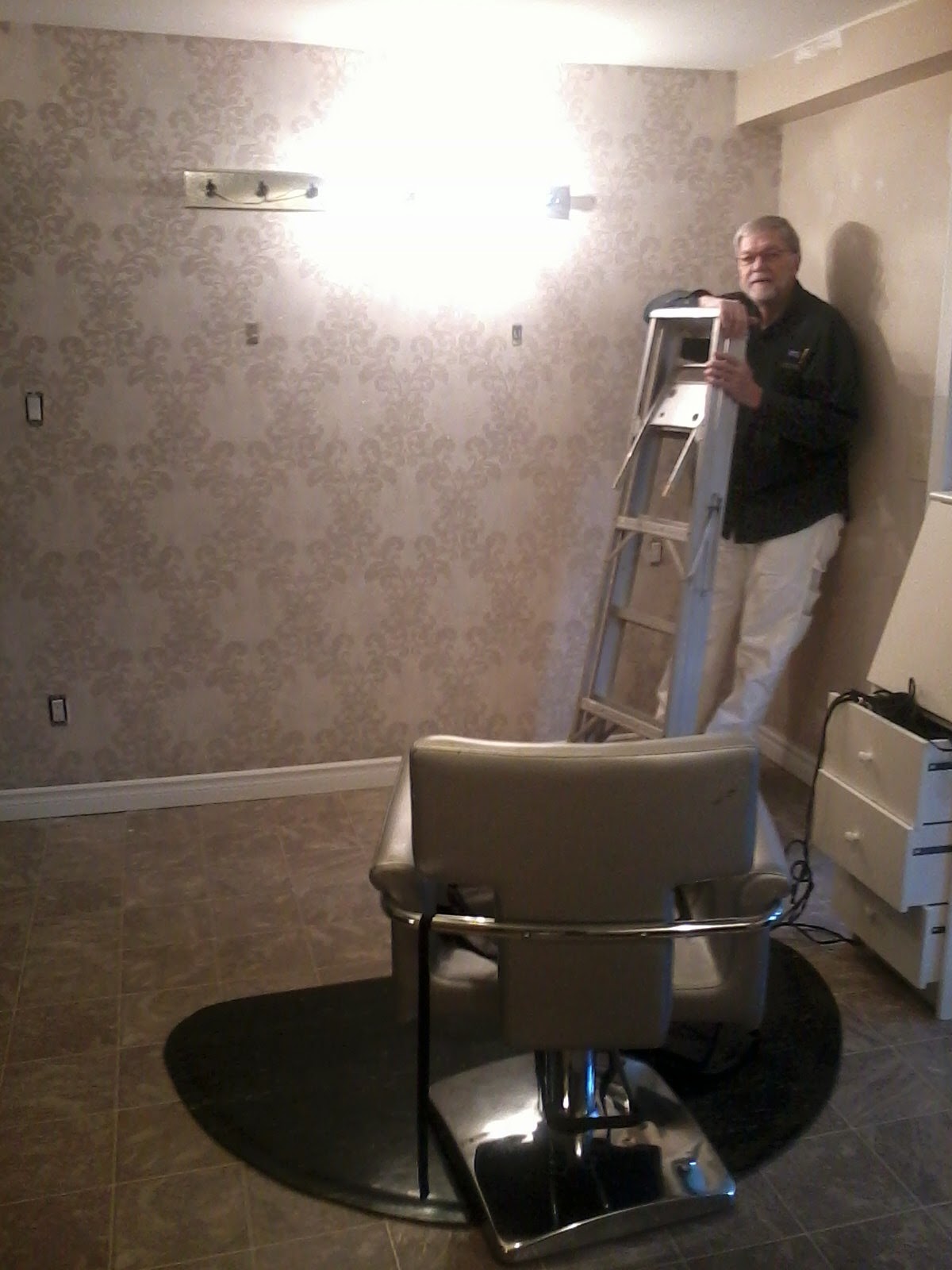 I have been getting positive feedback regarding my work posts so here are another 3 jobs that we have done recently. This one is glittery wallpaper in a hair dressing salon. The owner had us do her other studio about two years ago and called on us again for this new venture. 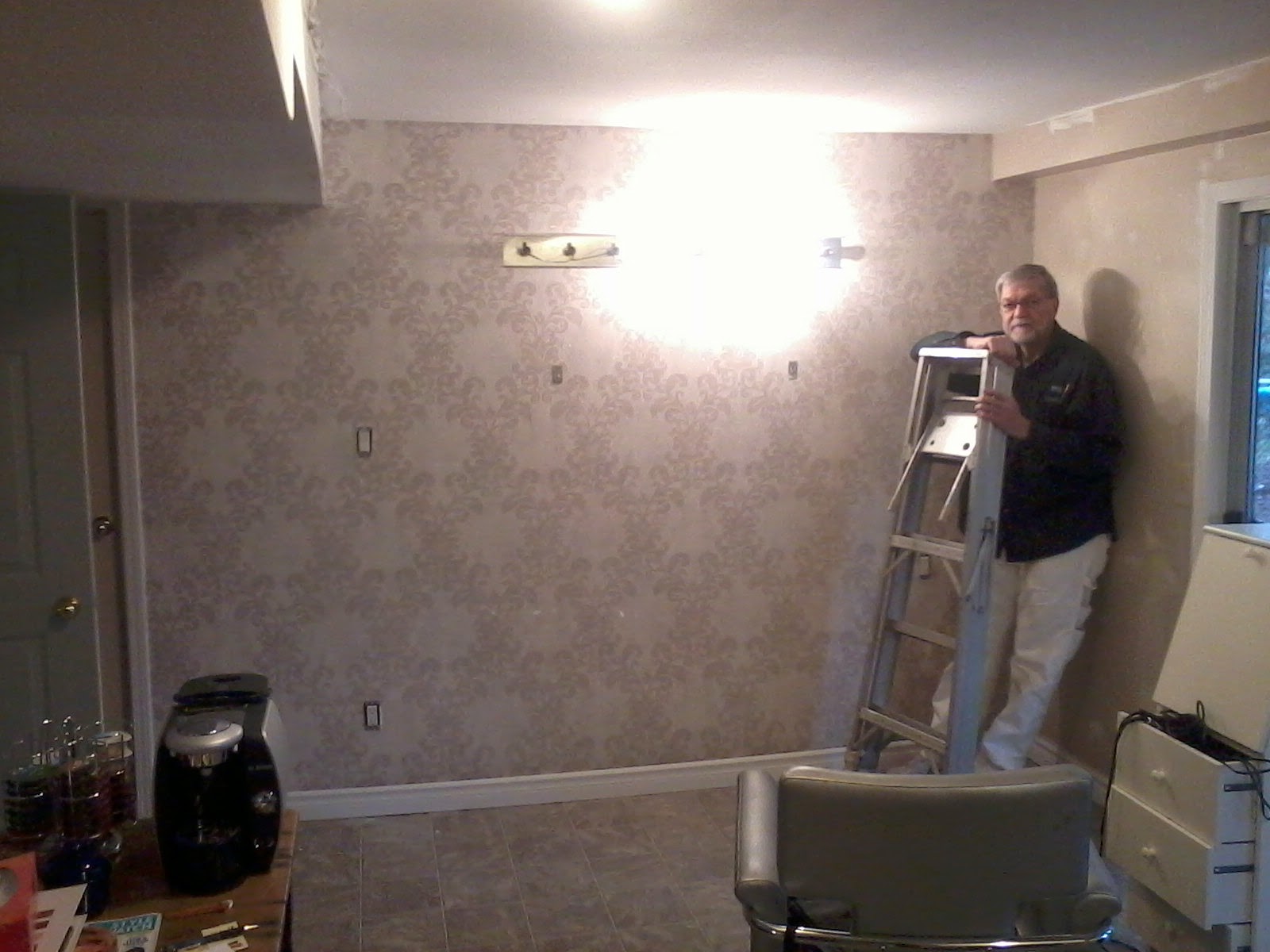 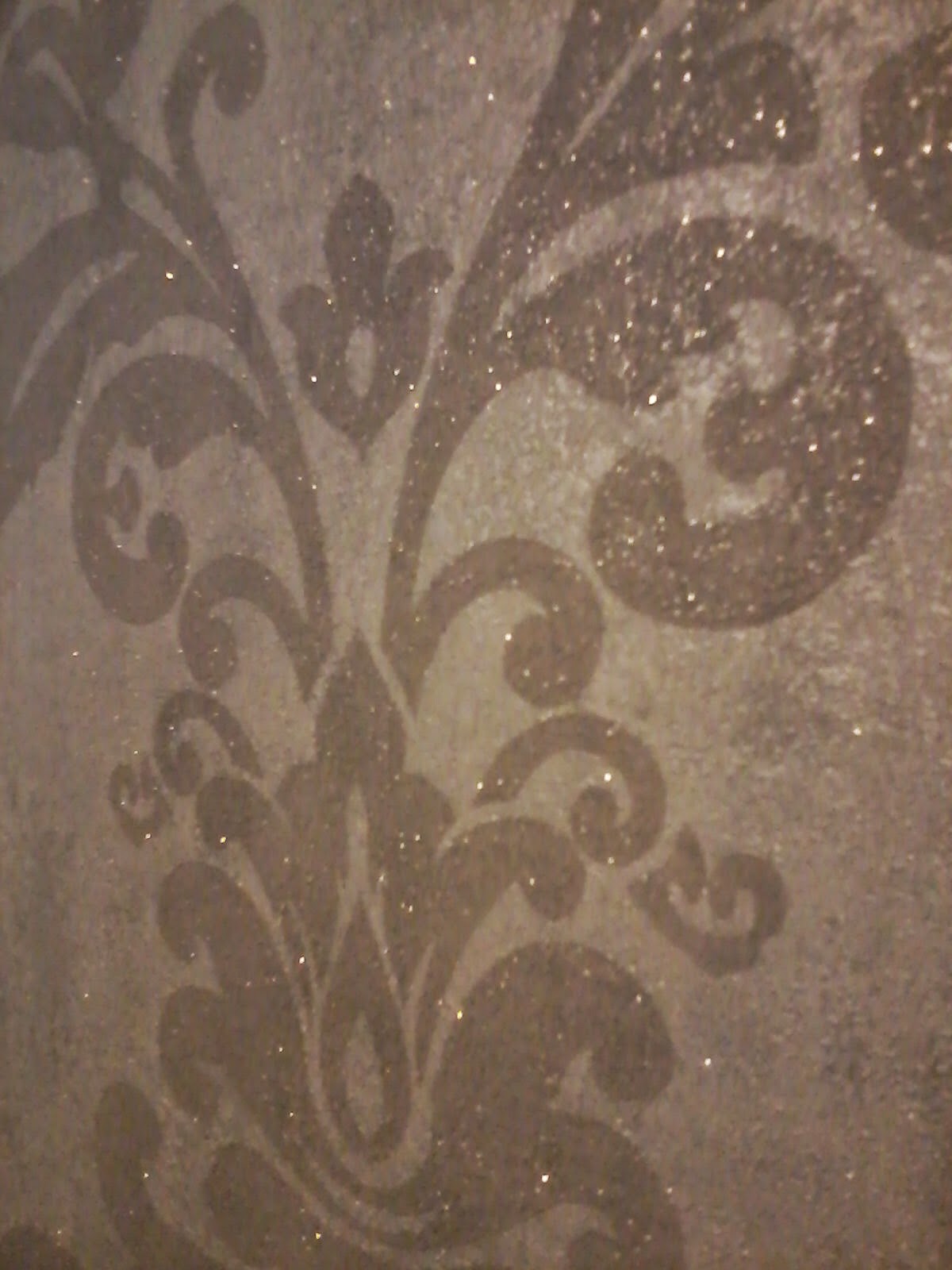 The glitter only shows up in certain light at certain angles. The seams totally disappeared on this product and she was more than happy when  we had enough left over to cover the walls in this small alcove. 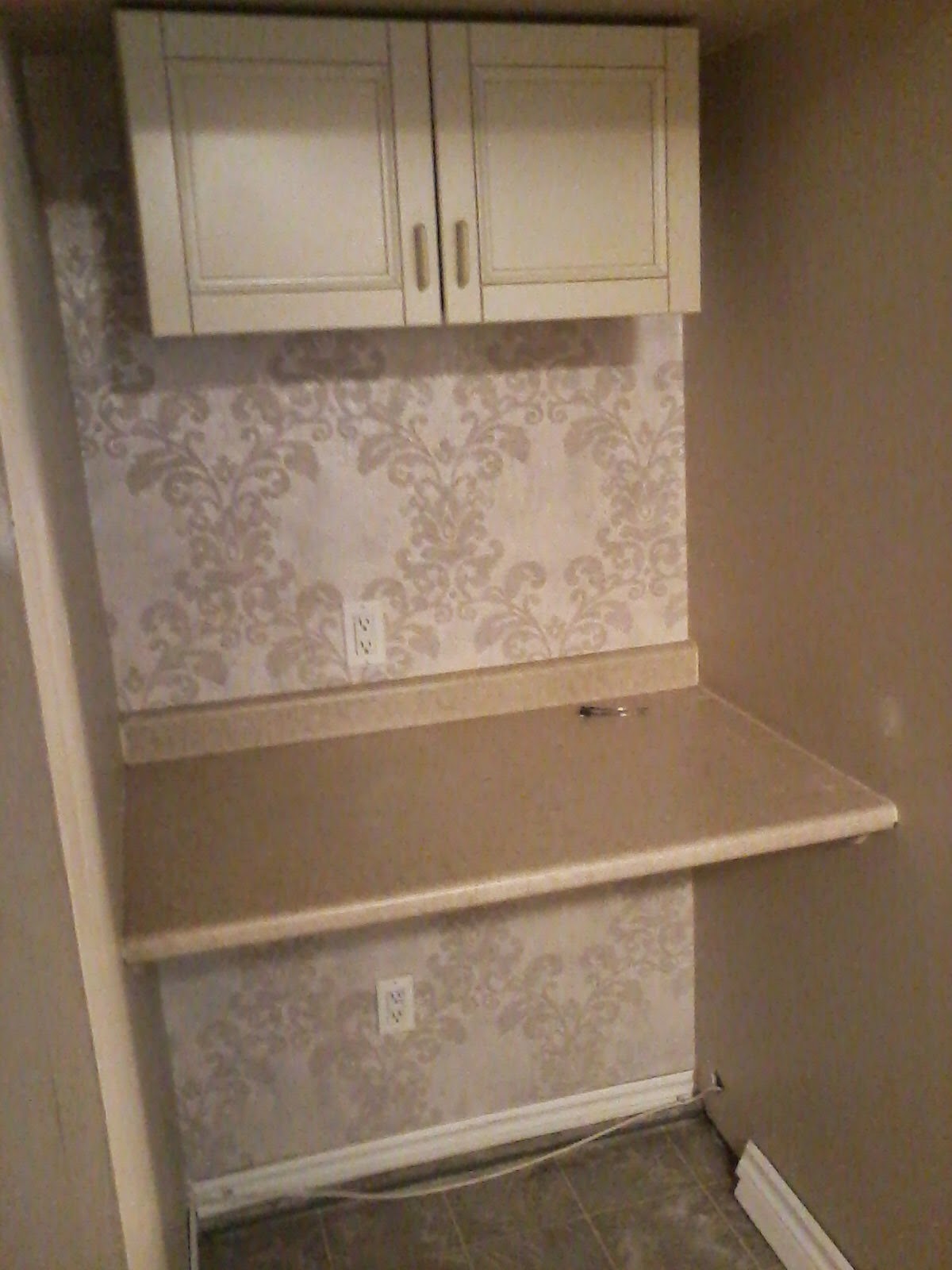 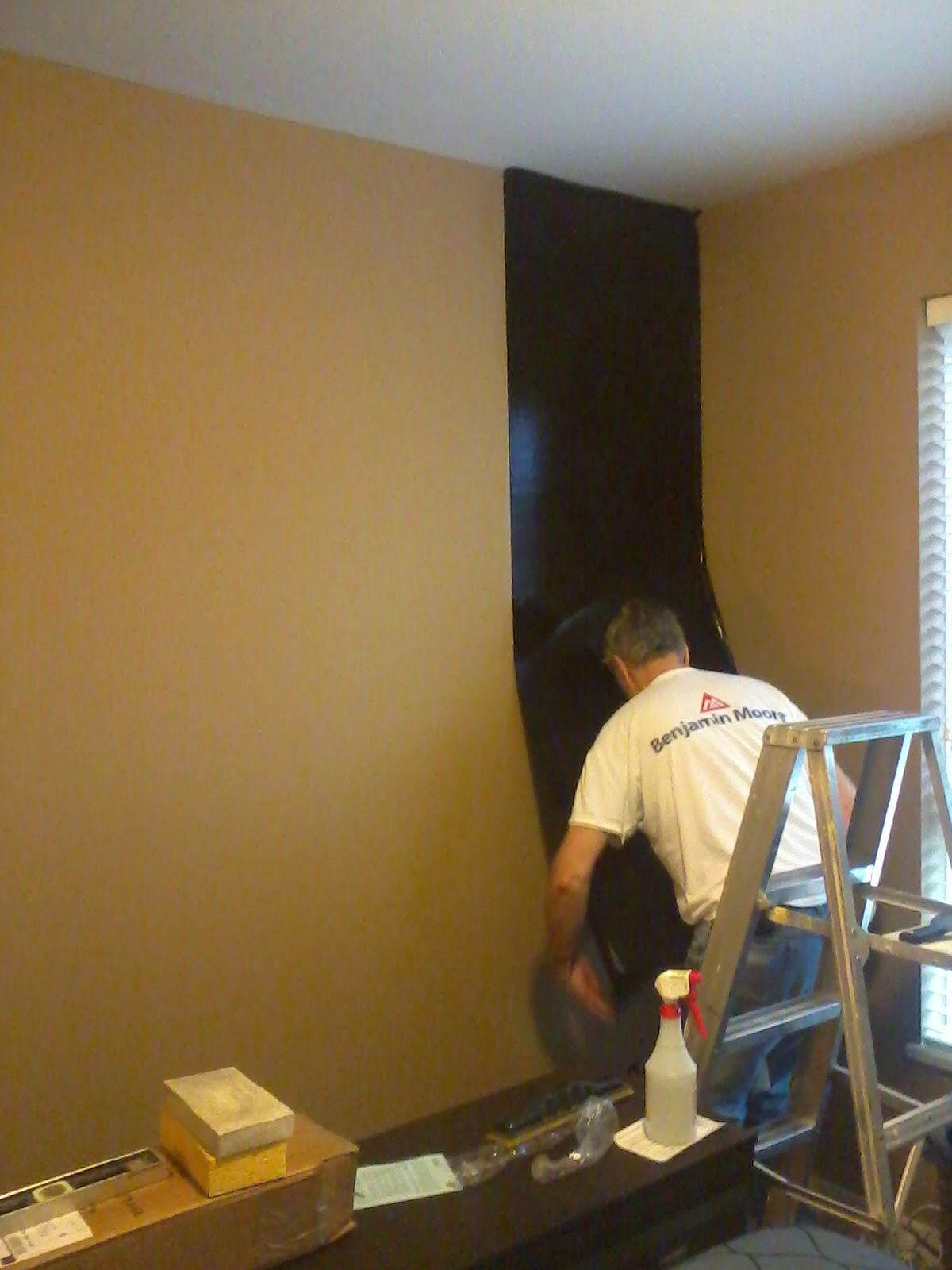 I have become quite leery about pre-pasted wallpapers as there is little control that the hanger has over the many things that going on with this obsolete kind of product. This pattern was shiny black on matte black and when it was wet, it was all glossy, making it literally impossible to see and match the pattern. A bright halogen lamp held at a certain angle was the only way to see what I was doing.
The seams were cut wavy at the factory so they were open and closed, open and closed. Not much I could do. 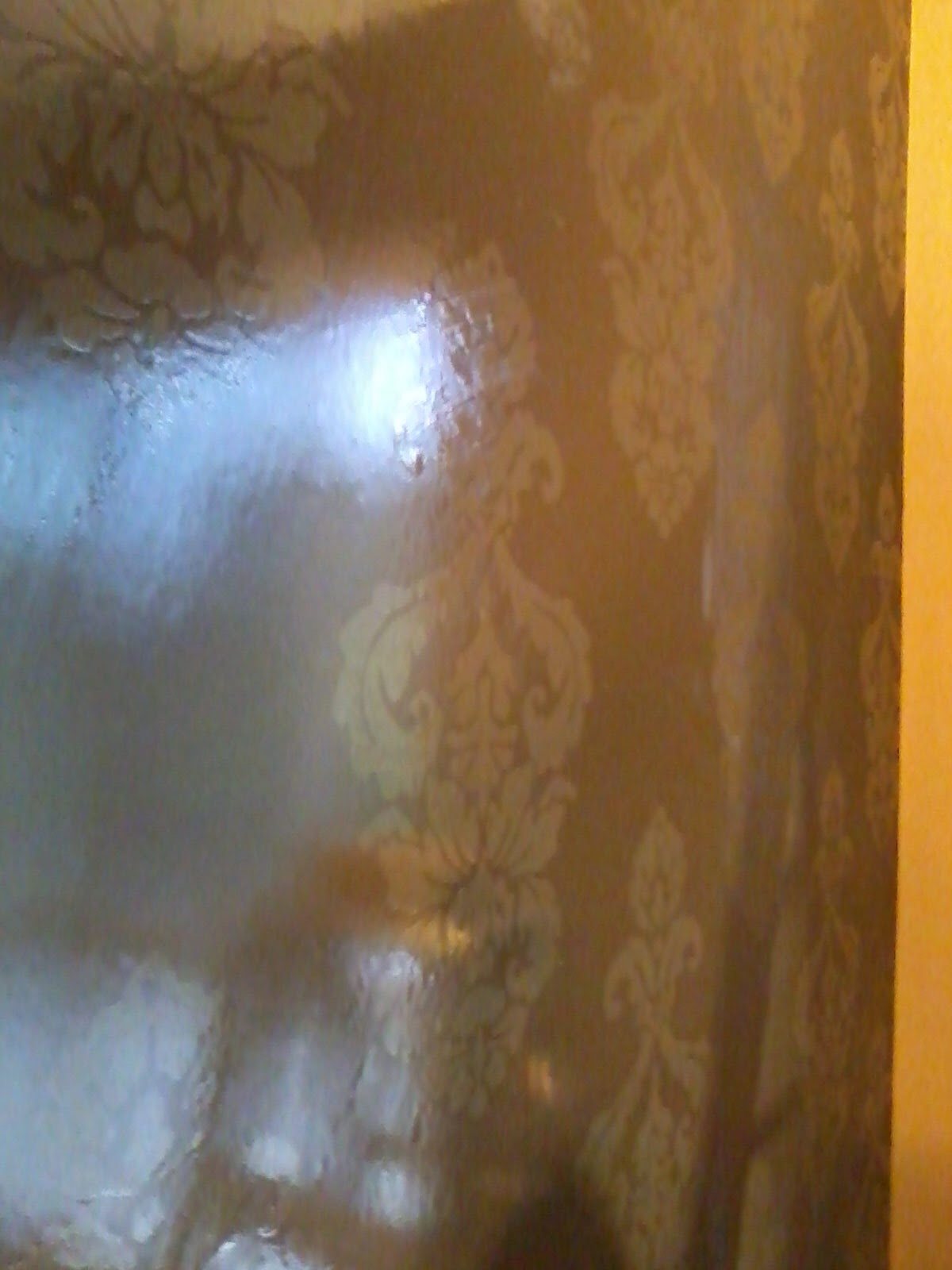 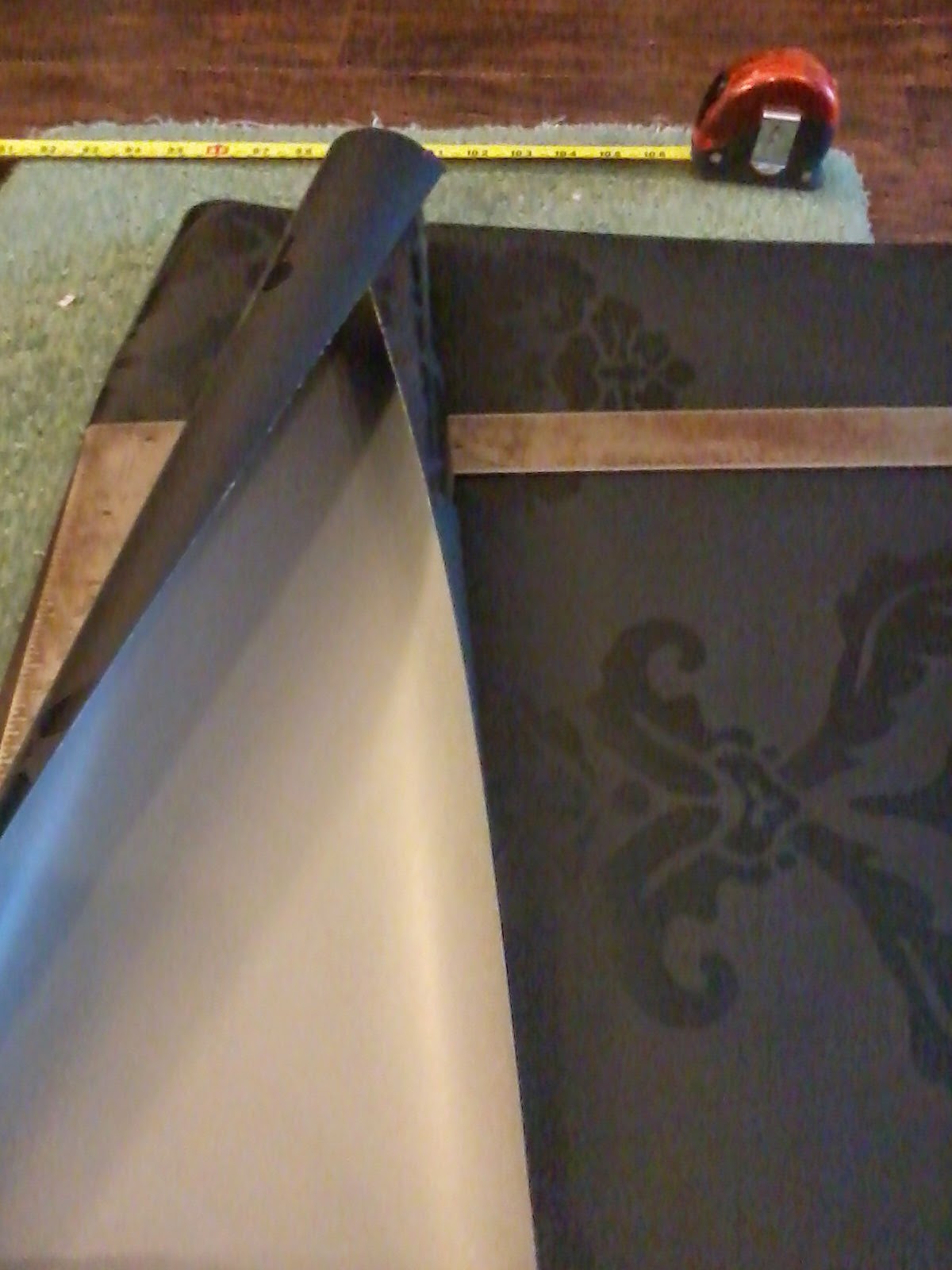 I felt bad for the customer and gave her a big discount on my hanging fee even though the problem was not anything to do with me. I suggested she get a supplier rep in to see the flaws for himself and refund her the money both for the paper and for our fee. It has been 10 days and I have not heard back from her. 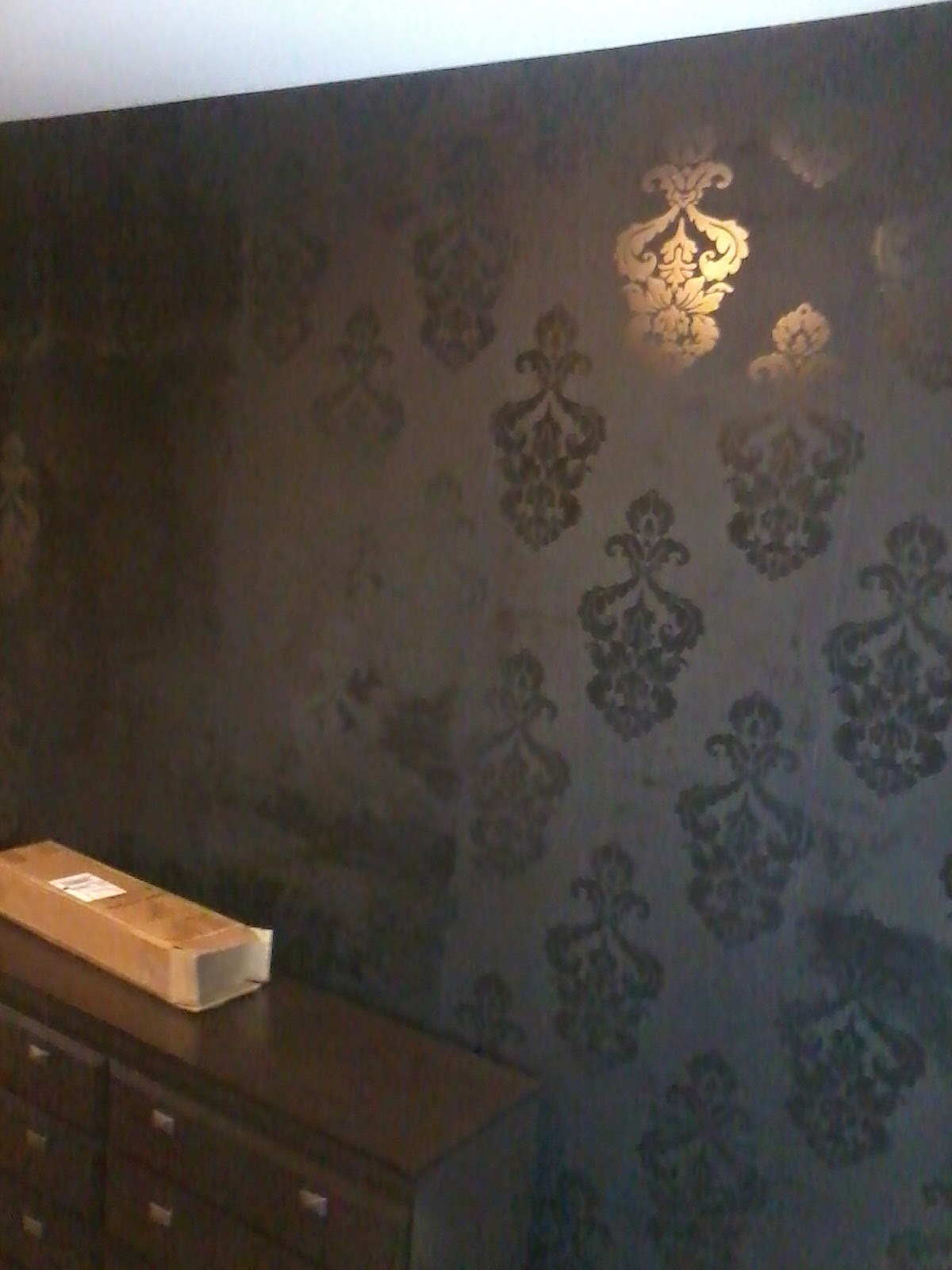 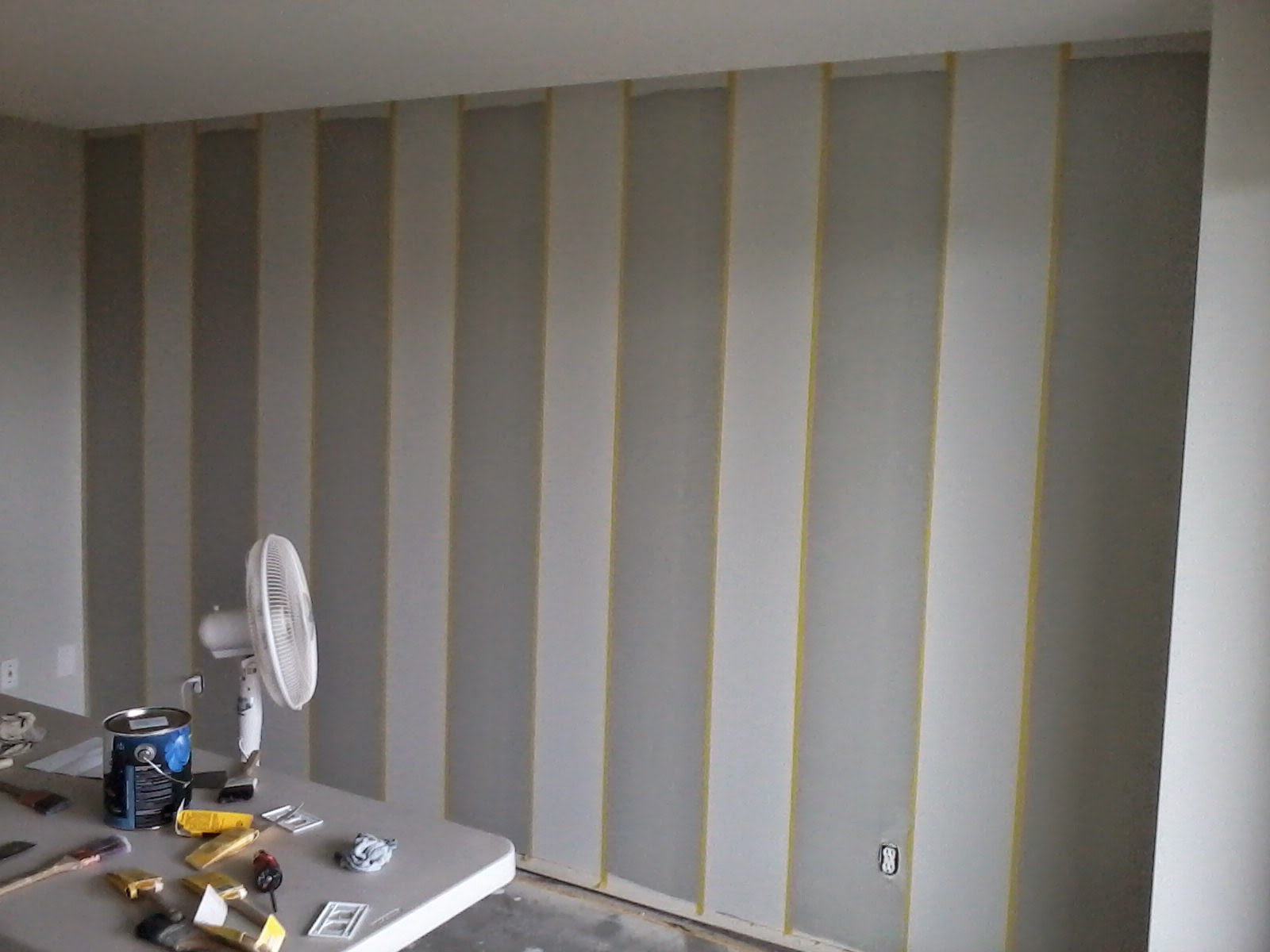 Doing this job was a pure pleasure. There were no floors, no baseboards, and new crown mouldings were going to be installed so we simply rolled the walls twice and then mapped, taped, and painted the vertical stripes. Dark grey on light grey is a winning combination and the final result was stunning. 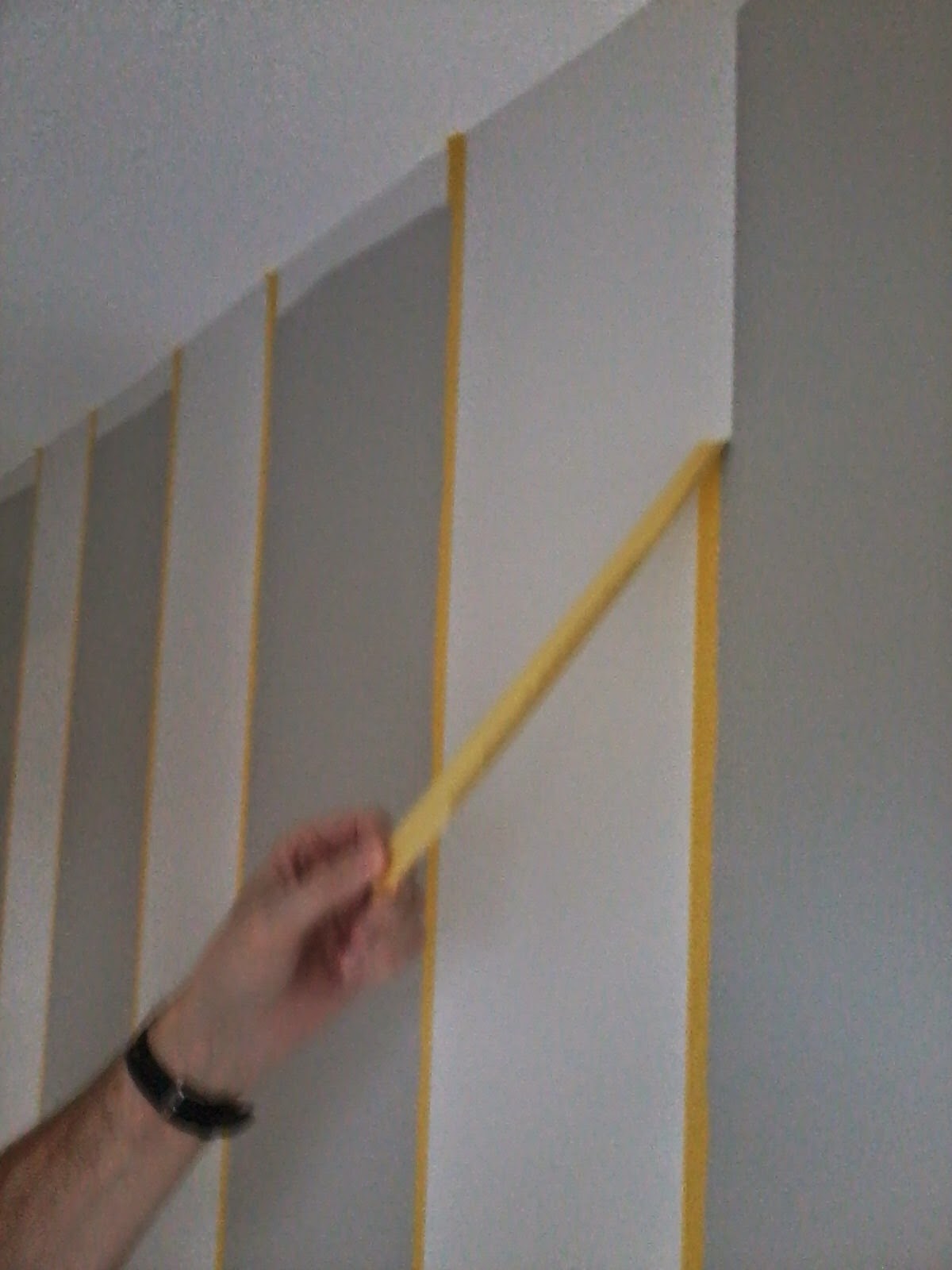 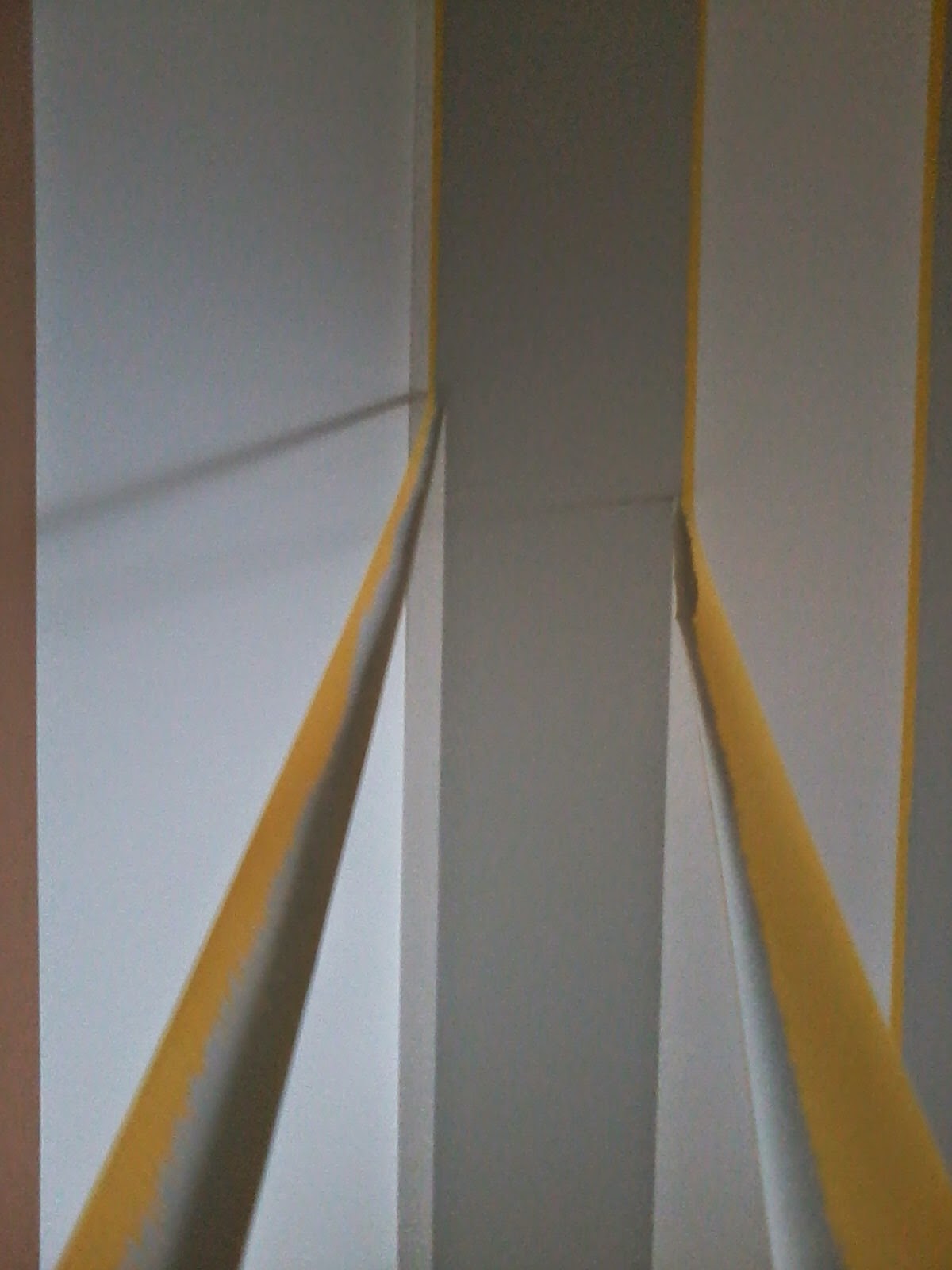 Using the new Frog tape for delicate surfaces, we were able to tape and then peel the stripes all within an hour. For those not familiar with this tape, it has a chemical in the adhesive that is activated by the paint and forms a perfect seal on the tape's edge. There is zero bleeding with this tape and the stripes were razor sharp.
In and out in 4 hours and another very happy customer. 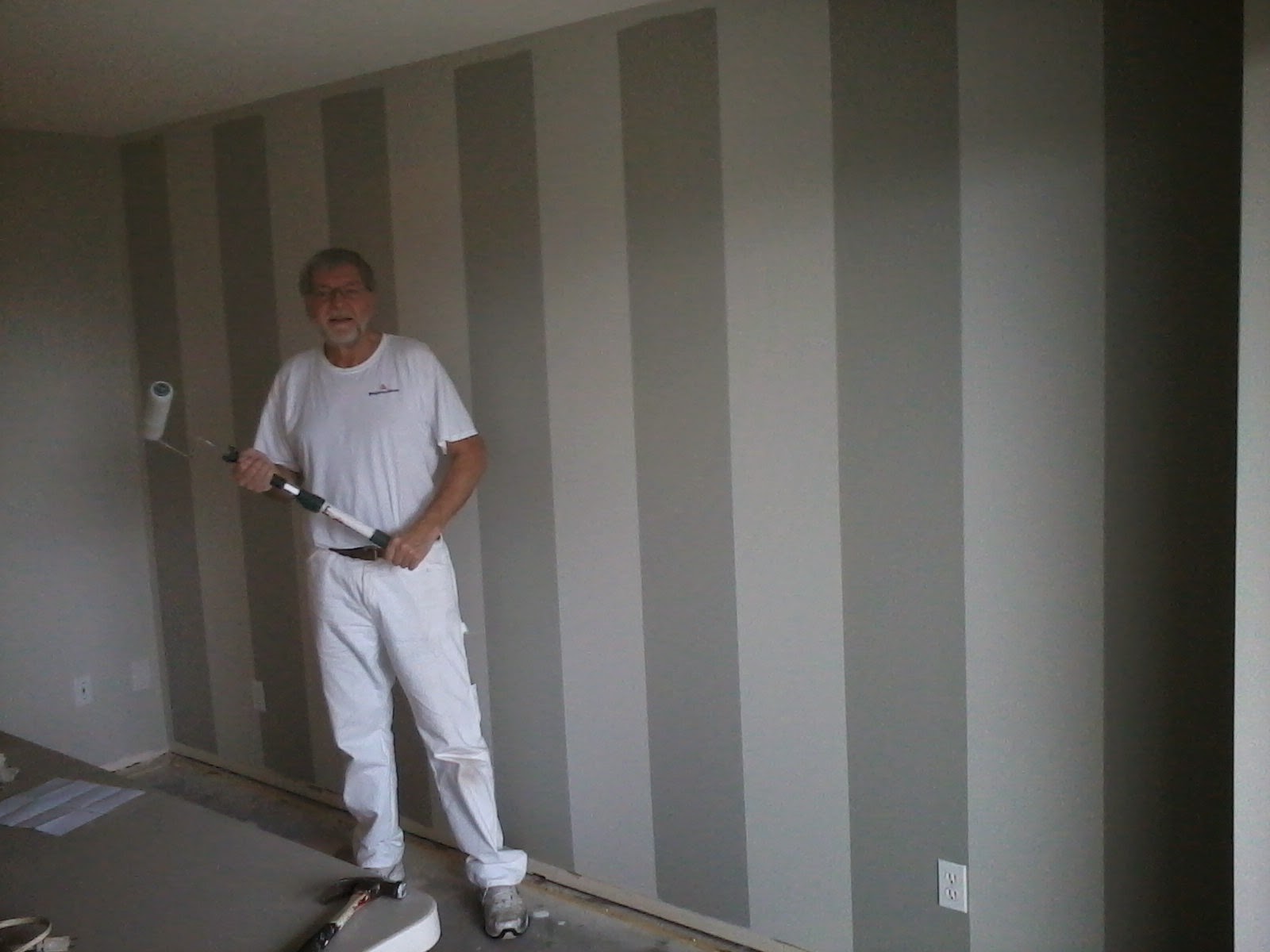 We Are In a Shadowland

After a brief hiatus, I will make an attempt to post a few items in the next few days. I met one of my faithful readers a day or two ago and he was wondering if something was wrong with his computer because he was no longer getting any new posts on this blog. After 2200 or more posts I do suppose I was conspicuous by my absence.
busylizzy and I took in a live drama presented by the Gallery 7 theater group here in town. It was quite a few years ago since we saw the movie and also saw the first presentation of this drama by this same production company but in a different venue and with different actors. It was fresh for me not only because my memory about such things is not sharp, but the passage of time and some maturing on my part gave me a different perspective on the issues in the story, this time around.
For those not familiar with this story, it is about CS Lewis and his brief marriage to an American woman, Joy Gresham. 'Jack' Lewis was an avowed bachelor and indeed felt awkward around women, but was quite smitten when he met and fell in love with Joy, an effervescent and life-loving, yet divorced woman. They start out as friends, end up in a marriage of convenience so Joy could move to the UK, and after she is diagnosed with bone cancer, they truly marry and spend three wonderful years together before the cancer takes her life.
The first scene shows Jack lecturing an audience on pain, suffering, loss, and a loving God. He is confident and has all the pat answers. Near the end of the play, Jack is again giving the same lecture but his beloved is on her deathbed. You can see, hear, and feel the doubt and questions he has as he utters the same words of several years ago. Now theory has been replaced with experience and he is doubting.
For me it was a very moving scene as I could identify with Jack, as I am sure many others could. I was glad to come away from the play encouraged instead of with further pondering of this important life question. The casting and acting were superb. Although the play has now run its course, I would highly recommend at least seeing the movie.

Email ThisBlogThis!Share to TwitterShare to FacebookShare to Pinterest
Labels: This and That
Newer Posts Older Posts Home
Subscribe to: Posts (Atom)