This photo was taken between the touristy little town of Three Sisters and the big touristy town of Bend. The two largest sawmills in North America were located in Bend and when that industry fell into decline, some enterprising businessmen built a ski resort or two and this area has now become a destination for both summer and winter sports enthusiasts. After staying the night in Bend in a very pleasant hotel called Three Sisters Inn and Suites, we rose early and rescinded the decision of the night before to explore the shopping districts of Bend. When you have been to Whistler, more of the same is not our idea of a good time. Neither of us are 'shoppers' and besides, the beautiful sunny day and the wonderful landscapes were beckoning.


I have seen this scene in many photographs in the past, and now I have my very own version of it. What a bonus to have the fluffy white clouds lingering over the distant rocks. A reminder to see these photos large with a click of the mouse.


We were not the only Canadians in southern Oregon. These Canada Geese were gleaning where a wheat harvest had just taken place. We were sorry to have missed the harvest, but the golden fields of stubble were still photogenic.


This enterprising yet nostalgic rancher lined his driveway with vintage farm implements, all of them giving in to a heavy coat of rust. He has a lovely 'back 40'.


A short row of abandoned jet liners at the Bend Airport. We missed the shower by a few minutes.


Almost the same photo as above. It is late an I am getting repetitive. 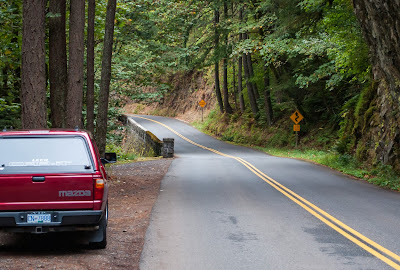 We headed straight north from there and spent the night in Gresham, just east of Portland and a stone's throw from the Columbia Gorge, a good starting point for the next day's waterfall adventures. The photo is actually on the historic Oregon Highway 3 just out of Gresham.